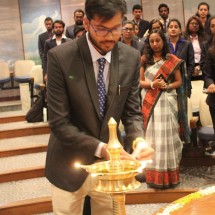 In this modern era, organizations greatly rely on computer networks to share information throughout the organization in an efficient and productive manner. Organizational computer networks are now becoming large and ubiquitous. Assuming that each staff member has a dedicated workstation, a large scale company would have few thousands workstations and many server on the network.

It is likely that these workstations may not be centrally managed, nor would they have perimeter protection. They may have a variety of operating systems, hardware, software, and protocols, with different level of cyber awareness among users. Now imagine, these thousands of workstations on company network are directly connected to the Internet. This sort of unsecured network becomes a target for an attack which holds valuable information and displays vulnerabilities.

In this chapter, we describe the major vulnerabilities of the network and significance of network security. In subsequent chapters, we will discuss the methods to achieve the same.

Be the first to add a review.